As I looked out the window yesterday I was in awe at the beauty Utah held.  There was mountains that made the ones from Arizona look like hills and they ranged from red to green in color.  As I stared I couldn’t help but to notice cows living by the road- having the mountain as a backyard.  I was then taken back to 1997.

My mind is a bit fuzzy and I do not recall all the details, but I do remember somethings quite clearly.  We were all at a farm or something similar that had cows.  I mean this place was large, there as hundreds of cows and we were just roaming around watching cows moo their life away.

While I was walking, my curious eyes notice a particular cow that was larger than the rest.  I could tell that this cow was some sort of leader because she was mooing louder than the rest, and the surrounding cows were giving her space.  I decided that i wanted to out moo this cow, and so I began doing what cows do best.  I began mooing- just to let everyone know I moo pretty good (it almost sounds real).  Anyhow, as I did my cow impersonation I noticed that every cow that could hear me was staring at me- and none were mooing.

I stared back and I noticed the big leader cow was staring at me too.  I will admit that I was slightly scared but me being a child began mooing again.  In my little head I was thinking “wow, I am actually communicating with these animals.” My fear turned into amazement.  Just then my dad put both his hands on my little shoulders and shook me as he told me to be quiet.

He was convinced the cows were going to charge at us- and thus my cow experience ended. 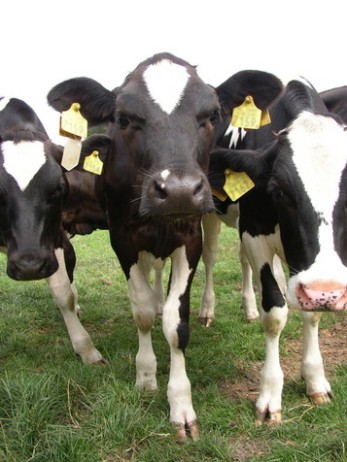